I recall fondly when my daughter, then in first grade, asked me to come to class to explain what I “do for a living.”   At the time I was the Chief Accounting Officer for the first ever publicly-traded Carwash company.   I thought about what would resonate with the kids…I bought a toy carwash, some Hot Wheels and borrowed some “money” from our Monopoly game.

My daughter distributed the cars and money among the children and I acted as the cashier, collecting the money and keeping count while they ran their cars through the wash – complete with real water and soap. Great, messy fun!

After the demonstration I asked if the children had any questions. To my delight, almost all hands shot up! I momentarily forgot my audience as I readied myself to explain EBITDA, the difference between profit and liquidity, and capital-intensive vs. labor-intensive models.

I called on a little girl who asked what time I had to wake up in the morning to be an accountant. I told her I usually wake up at 6:00 in the morning. I called on the next child, who didn’t have a question so much as a declaration…”My dad wakes up at 6:30!”   The next ten kids I called on simply shouted the time at which one of their parents awoke each day.   I laughed at the fact that my demonstration was hijacked by a simple question that got everyone off track. I thought it was adorable…because they were six years old.

Fast forward twenty-five years. I still run in to this all the time! But it’s NOT six-year-olds, and it’s NOT adorable. It‘s a business meeting during which someone takes a left-hand turn, completely off the point, and everyone else just follows.   The first few times I encountered this with my clients, I did what most people do: be patient and hope that the conversation would eventually get back on track. It’s natural to not want to confront or embarrass someone in a group setting because they wandered from the point.

As this happened more frequently I tried, with limited success, pointing out that we were off topic. I then tried stressing the importance of being efficient with our time, as typically each person was a member of senior management, with a packed schedule. I even resorted to downloading one of several apps that allows you to input the salary and benefits of each person attending the meeting, and then keeps a running total of the cost as the seconds tick by. I would start this and leave my phone on the table for all to see.

I finally realized that some people just love to talk…about anything. Often about something that has nothing to do with the issue we’re trying to solve, and equally as often repeating themselves several times before yielding the floor. I’ve become acutely aware of when someone is stuck in a loop…one continuous statement that starts with a premise, moves to a conclusion, then circles back and repeats the premise, etc. etc. I count to myself how many times they’ve gone around, playing that carousel music in my head…

Then I came upon this: 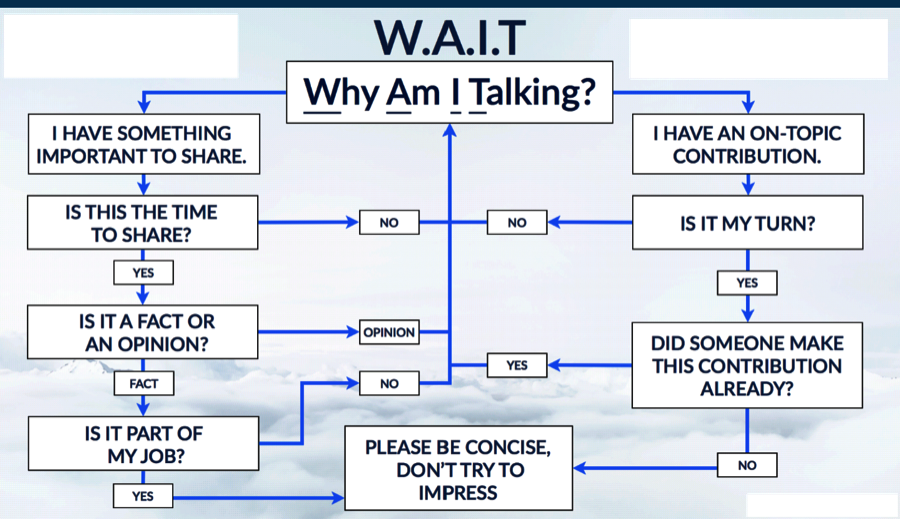 I’m not sure where this originated (there are a number of versions floating around), but I think it asks (or asks you to ask yourself) all of the right questions before you decide to take up everyone else’s time.

Distributing this prior to a meeting, or even posting it on a wall in the room in which we’re meeting, has made people more mindful of their penchant to go off on tangents, and has given those who want to get the meeting back on track a simple, non-confrontational device to which they can make reference. After a few meetings, everyone “gets it” and it becomes second nature, with people often catching themselves breaking the rules before anyone else speaks up.

There was also an unexpected benefit. Those folks who rarely, if ever, talk in meetings (you know the ones…they usually come to you right after the meeting with a good idea) now felt comfortable participating because the “rules” gave them the confidence to believe they were speaking up about the right thing at the right time.

Breaking these paradigms made my clients’ meetings much more effective and efficient, and as a result, more enjoyable (because they produce tangible results) and worth everyone’s time to attend. It’s not as adorable as listening to a group of six-year-olds meander from topic to topic, but it’s better than running a business meeting with adults behaving the same way.

For a bit of fun I’d like to hear what your version of this would be for W.A.I.T – Why am I TWEETING?

About the Author: admin